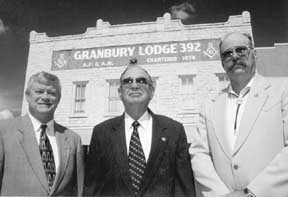 In 1874, the Brazos River was a determining factor in the history and growth of the Masonic Lodge.

In its earliest history in Hood County, Masons met at the Acton Lodge. Because they had to cross the Brazos River to get to Acton, many of the Masons had trouble getting to meetings. Crossing the river was sometimes impossible. At that time, Granbury was the new Hood County seat and it was beginning to grow rapidly.

Freemasonry is the world's oldest and largest fraternal organization. Its primary purpose is to promote character-building, faith in God and respect for every human being.

The Granbury Masonic Lodge supports the Hood County life blood program, gives scholarships to Granbury and Tolar High School students each year, and gives the Lamar award of excellence to a teacher and student in Granbury and Tolar.