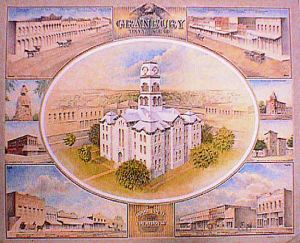 Surveyors were at work in what is now Acton as early as 1845. In 1852 Acton was classified as a permanent settlement known as Comanche Peak Post Office.

History of Acton by Randle Rash

Another History of Acton by Mary L. Watkins

A community established by ex-slaves

Descendants of The Colony

Comanche Peak: A Refuge From Civilization

Cresson and its post office were established in 1887. The city was named for John Cresson who headed a wagon train that passed through the eastern part of Hood County. Cresson returned later and settled in the area; or was it named after a railroad civil engineer's hometown of Cresson in Maine? or Pennsylvania?

Cresson School Building to be Demolished?

Home on the Range

Another History of Granbury by Ted W. Mayborn

Granbury Chamber of Commerce Presidents 1952 to 2003

Women's Influence on the Granbury Square

Another History of Hood County Written in 1926

1869 The Raid of the Seven Indians

Men Who Made Hood County

Kristenstad was once a flourishing community in southeastern Hood County from 1928 - 1941. Learn the truth behind this land development venture that captured the nation's attention and had direct ties to the cabinet of President Woodrow Wilson. Mystery, intrigue, politics, and romance - it's all here!

Named for the Lipan Indians who roamed the area

Another History of Lipan by Carl Dean Ator

Citizens of Lipan Index from Glancing Backward, A History of Lipan, Texas by Iris Williamson Hubbard

Another History of Add-Ran College by June Rayfield Welch

Tolar was founded in 1870 by a group of Civil War veterans. The town was named for Civil War hero Captain Alfred "Alf" H.H. Tolar who was wounded at the Battle of Gettysburg.

History of Tolar by Jewel Cherry

Another History of Tolar by David Minor

Back to Biographical Noteworthy Index